Valuing Technology Companies: How Do They Compare to Traditional?

A few years ago, the technology company I work for hit an arbitrary milestone: its enterprise value was higher than a local real estate group that had spent years building and operated hundreds of brand-new, beautiful rental units across four large, multifamily apartment buildings.

“How can a technology company,” our founder asked, “be worth more than real estate that will be around in 100-200 years?”

The answer is a 3-part explanation.

From window washing to apparel manufacturing to enterprise SaaS, all companies are all valued on the same things. Their ability to:

As we’ll cover in future posts, how and when companies (choose to) generate profits can be a complex topic. But the concept is simple: individuals and institutions (let’s generically call them “investors”) want to put money into companies who have a high likelihood of returning (multiples of their) money in the future.

The ability to sustain a surplus is what enables companies produce profits year after year. A lack of strategy or too little investment in building defensible moats means short-term cashflows may not be replicable in the future.

And investors don’t want to put $100 dollars into a company this year and only get a $110 back for one year. They want to see returns for many years to come.

The Shape of Your S-Curve and Intrinsic Values

In my opinion, the ability of every business to generate long-term, durable cash flows is in direct proportion to its moat. The harder it is to replicate success, the longer a company can enjoy pricing power, profitability, or both.

But the trajectory, slope, and length of the growth cycle of every company is also unique. 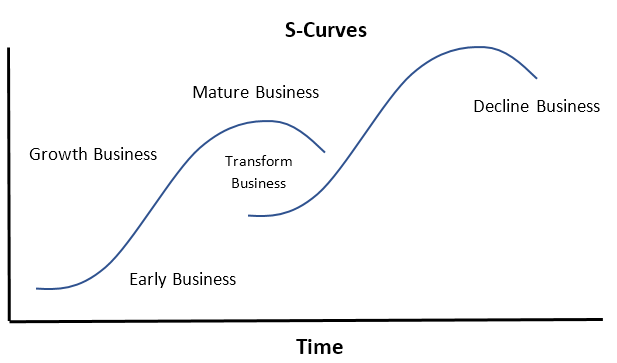 Investors are essentially placing a bet on the shape of a company’s S-curve. The height determines how large it can grow while the slope dictates its growth rate. The X-axis determines a company’s longevity. How long will they be around and how long can they maintain their peek?

Despite their ability to scale quickly and produce large profits, technology companies’ longevity have also been known to fluctuate widely. Why? By nature, they operate in disruptive markets. Consumer trends and new competitors can quickly shift the future outlook, especially if moats are not strong.

Said more simply, technology companies have characteristics that help them grow quickly. But if not properly constructed, those same companies could  “mature” and eventually decline shortly thereafter.

Real estate, on the other hand, typically doesn’t grow as quickly because those assets reside in more mature markets. But slower growth and lower peeks aren’t necessarily a bad thing. Better understood assets are generally viewed as “more stable” and protect against downside risks. Businesses with physical assets (buildings, trucks, tools, furniture, fixtures, equipment, etc.) have a lower downside because those assets have an intrinsic value

As entrepreneur and author Peter Thiel puts it, “Companies come and go, but cities rarely die.” Why? The tangible assets of residential multifamily real estate mean their intrinsic value will endure for a long time. People need places to live, after all. So long as humans need shelter, the likelihood of real estate going to zero is low.

What makes technology companies so valuable?

Generally speaking, technology companies are valued at a premium to offline or traditional companies due to a number of factors.

The first is high margins. Because digital solutions require bits and not atoms to produce, the materials – or cost of goods sold (COGS) – required is minimal. In fact, this number is so small – usually between 7 and 15% of sales – that many software companies give their product away for free initially in an effort to get customers using the product. Since the incremental cost to get one more person using a digital product is so low, they don’t have to worry about eroding margins.

Conversely, even a physical product as small as a t-shirt can’t be given away for free because the materials needed to make the shirt costs represents a large portion of the potential profit. There is fabric, boxes, zippers, and ink to pay for before a customer can ever get something in her hands.

The second factor is ease of distribution. The online world we rely on means large addressable markets exist far beyond our local geographic areas. Technology companies can sell their products far and wide to customers all over the world who have a problem that can be solved with software. When distribution of a product is frictionless and instantaneous, the slope of an S-curve for a technology company may be very steep.

The third reason is scalability. Growing a technology company’s infrastructure to support new demand isn’t easy, but it can happen quickly. Structures for rental housing, self-storage, and even mobile home can take years to develop. Technology companies don’t need to wait for another building to be constructed to increase capacity. Expand the number of servers you’re operating on the backend, and technology can scale 10-100x as quickly as needed.

How are technology companies valued?

There is a difference between value and price. Value is what an asset is worth while price is the amount someone is willing to pay for it.

In theory, the two amounts should be (nearly) identical. How can something be worth $10 if no one is willing to pay $10?

But during certain periods, those two numbers can be quite different. Consider public companies. Their value is based on the number of shares x the amount the market is willing to pay per share. When the markets are “up” and investors are feeling bullish on the future, that may be $100 per share. But if investors get nervous, the same stock may only trade for $73.

That means a company’s value may fall 27% – or more – without any substantial changes to sales, margins, or profits. Crazy, right?

Thanks in large part to runaway successes like Apple, Facebook, Google, and others, the belief that all “technology” companies have the ability to spit off cash for many years is assumed.

Of course, no two companies are the same – even within the same industry. The delta in scale between the “winners” and “losers” within a sector can vary widely.

This is a short way of saying that not all companies should be valued equally.

Really, it comes down to unit economics. Take Uber, for example, who started as a frictionless alternative to the taxi. By tackling transportation for everyone, they addressed a massive market with a high probability of repeat customers. However, because there is no true way to create customer lock-in (checking Lyft’s prices is just a click away), there is always an alternative available which prevents pricing power. (Taxis also still exist.)

So even though their revenue has scaled significantly as more and more people have used their service, they still haven’t found a way to turn a profit – 13 years later. How much money are you willing to invest in a company that is done growing and doesn’t have a clear path to paying you back?

Why are technology companies so desirable as investments?

People invest money into opportunities that have the ability to grow and generate outsized returns in the form of cashflows over time.

While digital companies can be highly profitable, the effort required to reach escape velocity (i.e. pull away from competition and/or reach a critical scale) and the strategy needed to maintain a competitive moat or become a monopoly is significant.

But once that velocity and scale kicks in, it is hard to debate whether technology companies make good investments or not.

In 2021, Salesforce generated over $19 billion in gross profits and $1.4 billion of net income.

Why do so many entrepreneurs build technology companies?

Tech has long attracted the brightest talented in the world, drawing bright minds from across the country to areas like Silicon Valley, New York, and Los Angeles. Today, hubs like Austin and Miami are attracting the next wave of digital, crypto, and Web3 entrepreneurs.

Since digital companies with large addressable markets have a much larger potential upside, the opportunity to create outsized returns – and, therefore, wealth – is significant.

To go back to the concept of the S-curve, technology entrepreneurs with the skills to grow a company to a high peek over a short period of time stand the chance of being rewarded handsomely for their efforts. The tech companies who “make it” are either acquired by private equity firms or larger technology companies. They may also go public.

In doing so, founders and employees with equity may cash out by pulling future profits and equity into the present. This allows companies who aren’t yet profitable to be rewarded financially when buyers are willing to bet they can return money in the future.

What are the risks of investing in technology companies?

On the surface, technology companies seem sexy: they have the ability to grow and scale quickly; they get a lot of news coverage; they attract smart, young employees who want to work on cutting-edge products.

But what most people fail to realize is that while technology companies can experience higher highs, they are also more susceptible to lower lows.

Their S-curves can rise quickly – but they can also come crashing down.

For all of the reasons listed above, the benefits of building a technology company are what attract a lot of smart investors and operators to the space. In less mature markets, it is not always the company that builds the best product that wins. Competitors will better distribution, pricing, or niche offerings may find fit and scale more quickly, making scaling a technology company difficult.

Technology without a moat will almost always lose out to better or less expensive alternatives. Pricing models and implementation cycles play a large part in determining how long a customers stays with their technology provider or using a digital product.

Traditional small businesses may not win too many awards for innovation, but what they do have is product-market fit. As Brent Beshore puts it, “People have been dipping their bodies in water to cool themselves for thousands of years.” For this reason alone, Permanent Equity was comfortable buying a leading pool construction company in Phoenix.

An app that tracks your dog’s sleep cycles? That product may get broadly adopted – or it may not. The underdeveloped nature of a market introduces risk into the system which may inhibit your company’s ability to produce profits over time.

Technology, by definition, is highly disruptive. If you believe in the theory of incremental gains, the capabilities of technology will accelerate at an accelerating pace.

Said differently, things will get a lot better, faster. This means solutions that are being adopted today may be replaced in the near future with even better solutions.

Entrepreneurship comes in many  flavors.

Owning a stable, low-growth, profitable business may suit your lifestyle and aspirations well. Or maybe starting a new company in a bleeding-edge sector is what fires you up.

In either scenario, understanding the underlying basics of a business will serve you well.

← What Is Private Equity and How Does It Work?